Gas welding, or oxy/fuel welding as it is commonly known, is slower and easier to control than electric arc welding. This method binds the metal together by heating - the heat source is the flame produced by the burning of fuel gases such as acetylene, methyl acetylene (MAPP gas) or hydrogen. Temperatures can reach up to 6,000 degrees Celsius. This process sometimes includes the use of pressure and filling materials. Common gases used are oxygen and acetylene, hydrogen, propane or propylene. These gases are usually supplied in compressed gas cylinders, which can pose additional handling and transport hazards.

In arc welding, the high temperature required to melt the metal is generated by the electric arc. The arc is formed between the actual work piece and an electrode (rod or wire) that is guided manually or mechanically along the joint. The electrode can be a rod designed to simply transmit current between the tip and the workpiece, or it can be a specially prepared rod or wire that not only conducts the current but also melts and provides filler metal for the joint. 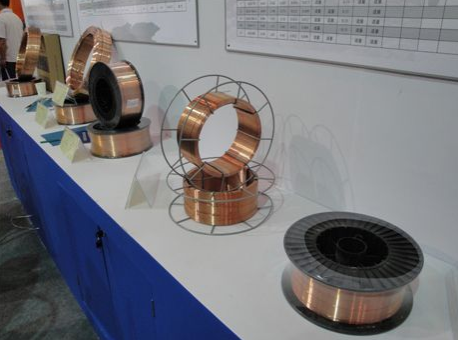 The power source for arc welding can be either alternating current (AC) or direct current (DC). The working cable is connected to the work piece and when the energised circuit and the electrode tip touch the work piece and withdraw (but still remain in close contact), the electrode cable creates an arc across the gap. The arc generates a temperature of approximately 6,500 degrees C. F at the tip. This heat melts the base metal and the electrode, creating a pool of molten metal. The metal at high temperatures reacts chemically with the elements in the air (oxygen and nitrogen). Oxides and nitrides are formed, destroying the strength of the weld. A shield of gas, steam or slag is used to cover the arc and the molten pool to prevent or minimise contact between the molten metal and the air.

Shielded Metal Arc Welding (SMAW) is often referred to as "stick" welding. A flux covered electrode is used to form a gas shield around the molten pool. The flux coating rapidly forms a protective "slag" during the welding process, thus creating a protective layer of gas and reducing contact with oxygen. The electrode is consumed as it moves along the length of the weld and the 'slag' has to be cooled and then chipped off.

Gas shielded metal arc welding (GMAW) is often referred to as "MIG" welding. A continuously fed electrode (i.e. wire) from the spool is used to supply filler metal directly from the torch tip to the weld seam. When the arc occurs, the electrode melts immediately and the shielding gas (e.g. argon, carbon dioxide or helium) is supplied through the torch nozzle. 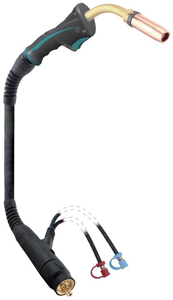 Tungsten gas shielded welding (GTAW) is often referred to as "TIG" welding. An arc is created between the tungsten electrode and the base metal. If required, a separate filler rod is fed into the molten base metal. A shielding gas (i.e. usually argon, helium or carbon dioxide) also flows around the arc to minimise interaction with the atmosphere. Water is usually used to cool the torch and cable.

Plasma arc welding (PAW) is similar to TIG welding in that the arc is protected by an inert gas to generate the necessary heat to melt the metal involved. The electrode is not consumed in PAW; however, the primary means of transferring heat to the workpiece is through a thermally ionised gas (i.e. 'plasma'). Temperatures of up to 30,000 degrees can be achieved. This is much higher than the temperature generated by the electric arc alone. Typically, PAW is a fully automated process. Filler metals, plasma and shielding gases including argon, argon/helium and argon/hydrogen can be used. Brazing is a process similar to welding in which a liquid filler metal is heated and flows between two or more metal surfaces to be joined. It is very flexible and any number of metals can be joined. However, brazing takes place at a lower temperature than welding, usually around 840 degrees. The brazing metal is heated to a liquefied state and spread over the surfaces to be joined, rather than both the base metal and the filler metal being heated to a molten state as in welding. The parts to be joined must be very clean, usually using mechanical methods such as grinding, lapping, sandblasting or the use of chemical solvents. There are several types of brazing, depending on the heat source. Brazing is often used to seal or join pipes and the associated hazards are similar to those of welding. Reviewing material safety data sheets for metals, cleaning agents, fluxes and filler metals is important to identify the associated health hazards and to implement appropriate hazard controls.

Brazing is similar to soldering in that the base material and filler metal are heated to melt and then solidified to form the joint; however, the soldering temperature is usually 840 degrees. Soldering usually involves a smaller group of parts to be joined and a 'softer' metal such as lead/tin or silver. The manual soldering process uses a hand-held soldering iron to heat the parts to be joined and the filler metal. The filler metal is usually in the form of flux cored wire with additional flux added to aid wetting (i.e. flow). Always check the Material Safety Data Sheet for the materials involved. Where possible, lead-free solder should be used to avoid potential lead exposure.

There are several relatively new heat sources for welding and cutting, such as friction, ultrasonic and laser. Each of these special heat sources requires protection and safe practices and is beyond the scope of this plan.

Previous News: What Is Submerged-arc Welding, and How Does It Work?
Next News: How Much Do You Know About Plasma Arc Welding?
Products Catalogue