The basic principle is that the arc formed between the electrode and the workpiece is contracted by a fine-bore copper nozzle. This increases the temperature and speed of the plasma emitted from the nozzle. The temperature of the plasma exceeds 20 000°C and the speed can approach the speed of sound. When used for cutting, the plasma airflow increases so that the deep penetrating plasma jet cuts through the material and removes molten material in the outflow plasma.
The process differs from the oxy-fuel process in that the plasma process melts the metal by using an electric arc, whereas in the oxy-fuel process, oxygen oxidizes the metal and the heat from the exothermic reaction melts the metal.Therefore, unlike the oxy-fuel process, the plasma process can be used to cut metals that form refractory oxides, such as stainless steel, aluminum, cast iron and non-ferrous alloys. 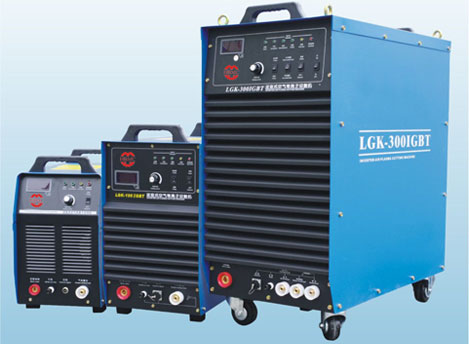 The power source required for the plasma arc process must have sag characteristics and a high voltage. While the operating voltage to sustain the plasma is typically 50 to 60V, the open circuit voltage required to start the arc can be as high as 400V DC.

In conventional systems using tungsten electrodes, the plasma is inert and is formed using argon, argon-H 2 or nitrogen. However, as described in the process variants, oxidizing gases such as air or oxygen can be used, provided the electrode is copper and hafnium.

The quality of the plasma cutting edge is similar to that achieved by the oxy-fuel process. However, when the plasma process cuts by melting, a characteristic is the greater degree of melting toward the top of the metal resulting in rounding of the top edge, poor edge perpendicularity or beveling of the cut edge. Since these limitations are related to the degree of arc shrinkage, a variety of torch designs can be used to improve arc shrinkage and thus produce more uniform heating at the top and bottom of the cut.

The plasma cutter works by emitting an electric arc through a gas, which passes through a narrow opening. The gas can be shop air, nitrogen, argon, oxygen etc. This raises the temperature of the gas to the point where it enters a fourth state of matter. We are all familiar with the first three: namely, solid, liquid and gas. Scientists call this additional state plasma. Since the metal being cut is part of a circuit, the conductivity of the plasma causes the arc to be transferred to the workpiece.

The restricted opening (nozzle) through which the gas passes causes it to squeeze at high speed, much like air passing through a venturi in a carburetor. This high velocity gas passes through the molten metal. The gas is also directed to the perimeter of the cutting area to protect the cut.

In many of today's better plasma cutters, a guided arc between the electrode and nozzle is used to ionize the gas and initially produce the plasma before the arc is transferred.

Other methods that have been used are touching the torch tip to the workpiece to create a spark, and using a high frequency starting circuit (such as a spark plug). Neither of the latter two methods is compatible with CNC (automated) cutting.

Previous News: Should I Use Laser Cutting or Should I Use Plasma Cutting?
Next News: What Is Plasma Arc Cutting?
Products Catalogue