What Is Plasma Arc Cutting?

A plasma is defined in Webster's as "a collection of charged particles ...... containing approximately equal numbers of positive ions and electrons and exhibiting some of the properties of a gas, but differing from a gas in that it is a good conductor of electricity... ...". You can also think of it as an electrically heated gas stream. I like to think of it as a condition where all the electrons from each atom are flowing between the atoms, not just orbiting. Whatever is happening inside the plasma stream, the way to cut metal with it is very simple. Take the current flowing through the gas and compress it through a small hole. Now that stream is really dense and moving very fast. The resulting stream can easily melt and blow through most metals. That's the plasma torch tube. 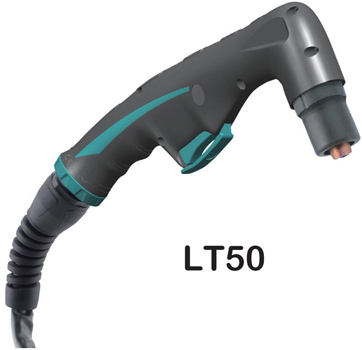 A plasma torch usually uses a copper nozzle to restrict the airflow and the arc flows through it. The arc jumps from the electrode in the torch to something else - usually the conductive material being cut. That's the "transfer arc. Some systems use a "non-transfer" arc, which jumps from the electrode back to the nozzle, but these systems are not usually used for cutting. This means that plasma cutting is only used on conductive materials, mainly mild steel, stainless steel and aluminum. But many other metals and alloys are also electrically conductive, such as copper, brass, titanium, Monel, inconel, cast iron, etc. The problem is that some of these metals melt. The problem is that the melting temperatures of some of these metals make them difficult to cut and have good edge quality.

Electrodes are usually made of copper, but have metal inserts at the point of attachment of the arc. That's because if the arc is attached directly to the copper, the copper will melt too fast. Tungsten is a good electrode material, so many electrodes have tungsten inserts. Some smaller flashlights use "pencil" type electrodes made entirely of tungsten with sharp ends. The problem with tungsten is that it will burn in the presence of oxygen. Therefore, when oxygen or compressed air is used as the cutting gas, the blade is made of a material called hafnium. Hafnium lasts longer in the presence of oxygen, but it still wears off a little each time the arc starts.

So why use oxygen in a plasma torch tube? For the same reason that oxygen is used in an acetylene torch - the oxygen in the plasma stream reacts with the mild steel. This is why pure oxygen is used only when cutting mild steel or "carbon steel". The chemical reaction between the oxygen in the plasma gas and the base material helps speed up the cutting process and improves edge quality. But since oxygen does not react in the same way with stainless steel or aluminum, cheaper gases can be used for these metals, such as nitrogen or compressed air (mainly nitrogen anyway).

Other special gases are sometimes used for other purposes. Argon is used for plasma marking (another topic). When cutting thicker stainless steel or aluminum, a mixture of argon and hydrogen is usually used. Some people use a mixture of hydrogen and nitrogen, or methane and nitrogen when cutting thinner stainless steel. Each mixture has its advantages (improved cut quality) and disadvantages (cost and handling).

So these are some of the basics of plasma cutting - the arc is carried in a gas stream from the electrode through the orifice and then into the conductive metal being cut. There are many other considerations that I will discuss later, such as swirl gas, kerf, height control, arc starting, protective gas, etc. But the basic principle is the same whether handheld or mounted on a CNC machine.

Previous News: How Plasma Cutters Work?
Next News: What Is Oxyfuel Welding And Cutting?
Products Catalogue